- at the fly tyers island and at the exhibitors

I was born in 1987, and ever since I was young I have played different fishing techniques and in 2010 I landed how to fly fish. I felt in love with it and it became my only passion. The following years, guided by friends, I started tying my first flies: both classics and modern flies. Since then, with the support of tiers well known in Italy and Europe, I have always tried to improve myself, getting new tips and refining my tying technique. I went constantly deep inside this new magic world with a lot of blood, sweats and tears, focusing mostly on the Italian Style where Francesco Palù was the pioneer. I had a cooperation with the famous cast teacher Massimo Magliocco, taking care of his tying articles, published by some important specialized magazines. In 2015 I tied at the Forlì Fly Fair for my friend Diego Riggi, founder of Dressing Italiano, in 2016 I attended at the Vicenza Fly Fair at “Fly Fishing 360” corner, an organization which I’m still associated to. In 2017 I attended again at the Vicenza Fly Fair tying at the desks of “Fly Tying Experience”, a tying group organized by Fabio Federighi, one of my best teachers and a friend. At this Fly Fair I won a Stonfo prize for a tying competition organized by the magazine La Pesca a Mosca e Spinning. I’m also a pro team member of Gulff Resins, Textreme , SWISSCDC, Dohiku hook and Fulling Mill . I’m still associated to the Bereguardo Greygoose Club where I share my passion with my friends. In 2018 I took part in the Vicenza fair at the “Pescare Show”and the Danish Fly Festival. In 2019 and 2020 I took part in Vicenza Fair at Pescare show, corner Fly tying experience. In the year 2021 I enter into collaboration with the Renomed brand, I join the team of Hurch fly fishing and Vision Italia. In 2022 I took part in EOS fair in Verona, corner “Italian fly tier show” I collaborate with the magazines “La Pesca a mosca e spinning” and “We are fly flishing”. My flies go through different techniques, from traditional to modern ones with the use of every kind of materials available. I try to represent “the Italian style” born from the great Francesco Palu and subsequently developed and customized by other great students of his concept of “seeing” a fly. This innovative style from the 70’s and still contemporary in synthesis looks at the construction of a fly as a whole finding a complete harmony between assembly and verisimilitude to the real insect giving priority to the movement of the artificial in the water. Thanks to the perfect mix of materials with different properties and appearance it is possible to obtain a perfect artificial in all its peculiarities. I go fishing in rivers in Italy and abroad, plenty of challenges where I love trying my flies and push my limits. I’m conscious to be only at the beginning of an hard and long way, to pursue a path that will allow me to grow professionally. 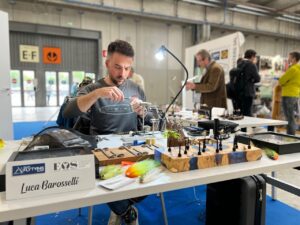