- at the fly tyers island and at the exhibitors

Hans van Klinken retired from the Dutch army in April 2012. After a 35-year career, Hans left his position as Commander of the Royal Dutch Army Gunnery School for heavy weapons. Hans was born in 1956 in Eindhoven in the Netherlands. As an inquisitive child, he began bait angling at the age of six in a nearby lowland brook called River Dommel, together with his dad. When he beat his dad by numbers he had to go his own way for first time in his life because his dad was simply too competitive.
Hans started fly fishing at the age of 15 in the Dombas area in Norway in the River Lagen. His story about that first experience is quite special too. He immediately fell in love with the unbridled beauty of the Northern and Arctic Regions such as Denmark, Sweden, Norway, Finland and Iceland. He continued to regularly travel to the north to spend the summer holidays well into the late nineteen-nineties. Scandinavia and Finland offered a vast array of river systems and lakes that allowed Hans to hone his particular fly fishing skills for wild rivers. His first venture into fly-tying occurred in 1976. Within three or four years he was creating his own designs. His preference became parachutes what led him to develop several unusual patterns and tying techniques.

Hans admits that he was an absolute fanatic dry fly purist for nearly 10 years until the early nineteen eighties. However, in the 1980s he began to recognize the value of other types of flies such as, emergers, flymphs, unweighted and weighted nymphs, streamers, classic salmon flies and saltwater flies. Unlike most noted European fly-fishers, Hans’ first salmon and sea trout were being caught on dry flies only and his skill in catching Atlantic salmon is quite spectacular. He is fishing dry flies for Atlantic salmon since 1971 and do that until present day. He developed quite a few unique and very special dry and wet fly salmon patterns for Norway, Nova Scotia, Newfoundland and Labrador. After nearly a decade (1971-1981) of exclusively fly fishing in Scandinavia, Hans also began traveling to other European countries such as Ireland, England, Wales, Scotland, Belgium, Luxembourg, France, Austria and Switzerland.

In 1982, for small groups of individuals who loved to fish high up in the north, Hans’ conducted his first private workshops in Bremen and Hamburg because he lived in Germany for his Army work in those days. In 1986 Hans joined as a member of the editorial staff of the Dutch Fly fishing magazine, and remained there for fifteen years. In the same year he also became the Dutch-area secretary of the Grayling Society in Holland. And he remains that still today.

His most famous pattern, the Klinkhåmer Special, first real success outside Scandinavia occurred in the UK on the Welsh Dee where he fished with Ian Small in 1986. The stories of his unimaginable success on a beautiful stretch of the River Dee began to spread faster than a wildfire.

Before Corona, he frequently travels to Canada, South East Asia, Scandinavia, Iceland and Finland where he was spending his long summer holidays and the between fishing holidays as a retired man. He enjoys sharing his knowledge about fly-fishing and fly-tying, and is particularly skilled in the taking of Atlantic salmon and grayling on dry flies. Hans’ most favourite patterns are parachutes, several emergers and a few realistic nymphs.

Since 1986, Hans has given several classes, lectures and workshops in the Netherlands, Wales, England, Belgium, Germany, Italy, Denmark, Norway, Sweden, Finland,  Iceland, Taiwan, Malaysia, South Africa, Canada, and U.S.A. He has written for many international and club magazines as well as contributing to quite a high number of books written by his friends, such as: Tying Flies with CDC, by Leon Links, Grayling on the Fly, by John Roberts, The World’s Best Trout Flies, by John Roberts,  To Rice a trout,  by John Roberts, River trout flies, by John Roberts, Fly Fishing for grayling, by John Roberts, Trout on the nymph, by John Roberts, Illustrated Dictionary of Trout flies, by John Roberts, Fly Tyers of the world volume 1, by Steve Thornton,  Fly Tyers Masterclass, by Oliver Edwards, The Complete Book of the Grayling by Ron Broughton, Fluer med historie, by Mogens Espersen, 60 fluer til regnbuer, by Mogens Espersen, The Complete Book Of Fly Fishing, by Malcolm Greenhalgh, Modern Atlantic Salmon Flies 1st and 2nd edition, by Paul Marriner,  Sterke Fluer some Flyter by Pål Krogvold, Grayling Flie, by Steve Skuce, Les plus belles Mouches de pêche by Nicolas Ranonneau, OIVALLISET Ottiperhot,  by Juha Pusa and many many more. He also works on several new fly fishing projects.

Finally, Hans supports and sponsors wildlife and environmental projects close to his heart. He is noted for donating to charity all of his proceeds from auctions of his flies, and his appearance fees from “commercial” workshops and classes. Hans does all his workshops and classes for free except once and while for charity reasons. Since 1986 Hans has returned thousands of dollars to different charitable projects and wildlife organizations. 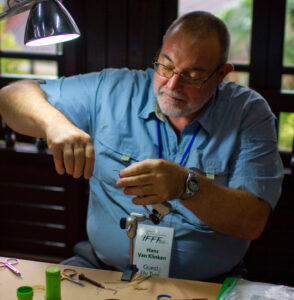